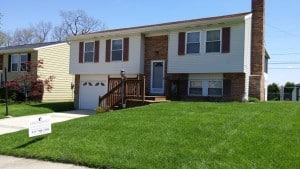 With the recent hail storm that swept through the Cincinnati area it was apparent that storm season was starting early this year.  The hail wasn’t that large, but came in with a furious wind that damaged many people’s roofing, siding, gutters and window screens.  Sometimes these early season storms are a sign of what’s to come.  In the case of a nice young couple in Cincinnati, it was a sign that they needed to have a professional contractor on their side from the beginning.

Their window screens looked more like Swiss cheese than a cheese grater, as the hail had shredded them pretty easily.  They were worried more about their aluminum siding, as it was covered in dents and no longer manufactured.

Unfortunately the insurance company wasn’t aware of some of the damages that can be caused by the storm, and disregarded many of the things that needed to be fixed on the home.  They were told the damages would amount to less than their deductible, and that it’s not worth filing a claim over.

This is where we can help, and did.  As experienced commercial contractors in Cincinnati, we did a full inspection on the home, adding the note of even more damage to the sun room roof.  After having the homeowner request an additional inspection we met with the adjuster.  After reviewing all of the damages the homeowners found out they would be getting a full siding replacement, new window screens and a new patio roof.  Happily contracted with Great Roofing and Restoration, this Cincinnati couple will be in a home that is even better than it was before the storm.

This is just one of the things we strive to provide the best service for, but it’s often one of the most important.  No one is perfect in anything that they do, and often a second, or even third look at what is needed will make all the difference.

In business since 2008, Great Roofing and Restoration is a GAF Master Elite Contractor, and services Denver, Cincinnati, Columbus, and Cleveland.

Find Us On the Web